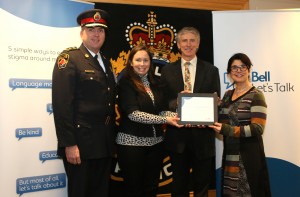 Hamilton, February 10, 2015 – The Suicide Prevention Community Council of Hamilton (SPCCH) is pleased to receive a $25,000 grant from the Bell Let’s Talk Community Fund to support evidence-based suicide prevention education and training for 750 first responders in the police, paramedic and fire services in Hamilton. First interveners, such as police officers, firefighters and paramedic services are often a first line resource for people who have significant mental health, emotional or substance abuse issues that may be suicidal.

“We are extremely grateful to Bell Let’s Talk for making such an important investment in suicide prevention education and training in our community,” said Sid Stacey, SPCCH Chair. “To create a suicide safer community, it is important to bring suicide into the mainstream conversation, create a community that is alert to the potential of thoughts of suicide, and foster help seeking behaviour.”

SafeTALK prepares helpers to identify people with thoughts of suicide and connect them to suicide first aid resources. Most people with thoughts of suicide, either directly or indirectly, invite help to stay safe. Alert helpers know how to identify and work with these situations to help protect life. This training will teach the most appropriate actions to take when suicidal thoughts are a concern to others. It includes advice on starting the conversation with those who are vulnerable and information on local resources they can tap into.

“With the Bell Let’s Talk Community Fund grant we have built SafeTALK Training related to suicide intervention into our annual Block Training,” said Hamilton Police Chief Glenn De Caire. “The session provides important information about suicide prevention and all of our officers and civilians will receive this training by the end of June. As a Service, we continue to encourage and engage in courageous conversations in support of accessing services and reducing stigma.”

“Since 2011, the Bell Let’s Talk Community Fund has invested more than $4 million to support groups working to improve access to mental health care in communities throughout Canada,” said Mary Deacon, Chair of Bell Let’s Talk. “We are pleased to provide this support for the Suicide Prevention Community Council of Hamilton’s SafeTALK program. The SPCCH is one of  almost 60 organizations to receive a grant from the 2014 Bell Let’s Talk Community Fund to extend much-needed help to people living with mental illness and the family and friends who care for them.”

The annual Bell Let’s Talk Community Fund supports organizations in Canada focused on improving access to programs and services that support and help improve the mental health and wellbeing of people living with mental health issues from coast to coast to coast with grants in the range of $5,000 to $50,000. Applications are now being accepted for the 2015 Bell Let’s Talk Community Fund. The 2015 application period is open until March 31 and all 2015 Fund grants will be disbursed before December 31, 2015.

The SPCCH is a not-for-profit charitable organization involving professionals and individuals from the community who are interested in suicide prevention and its related issues.  The Council was founded in 1980 and in 2010 launched the Hamilton Suicide Prevention Strategy supported by over 35 key community stakeholders such at the City of Hamilton, local school boards, hospitals, police services, social service and mental health agencies and business.  The suicide prevention strategy guides the work of the SPCCH as it works towards a vision of a suicide safer Hamilton.

How do you manage the anxiety of in-person life?  How can individuals cope with the anxiety related to a change in routine? Dr. Randi McCabe, a professor in the department of Psychiatry and Behavioural Neurosciences, shared some insights on how the McMaster community can cope with this anxiety and prepare for the fall. Great tips to help us navigate the inevitable changes.  To read more:  covid19.mcmaster.ca/how-to-manage-the-anxiety-of-returning-to-in-person-life/ (link in bio)   #copingwithaxiety#tips#returning to school #suicideprevention#suicidepreventionhamilton ... See MoreSee Less

Are you a healthcare professional, mental health worker or counsellor?  Check out the Be Safe App for Hamilton to better support your clients in a time of crisis.  Complete the safety plan together so that Be Safe can be there for when you can’t be!  BeSafeApp.ca to download and find out more! #besafeapp #suicideprevention#suicidepreventiohamilton#plan #resources#safetyplan ... See MoreSee Less

Today is World Suicide Prevention day and this year’s theme is Creating Hope Though Action.   Suicide is everyone’s responsibility and we can all make a difference by looking for Invitations to TALK,  ASKING about suicide directly, being there to LISTEN, and keeping them SAFE.   If you think someone you know is having thoughts of suicide, please reach out to Crisis Services Canada 1-833-456-4566.  You can download the Be Safe app and choose your region for local supports.  www.besafeapp.ca  Together, we can make a difference!  #wspd2021#suicideprevention#suicidepreventionhamilton#thereisalwayshope#makingadifference#besafehamilton#besafe ... See MoreSee Less

Rachael's Story Rachael Arielle Stacey, the third of four girls. A quirky and expressive, red haired, blue eyed girl with freckles. Rachael was an energetic, happy child with an incredible imagination. Her childhood was filled with summers at the cottage, cousins as best friends, music lessons and sports, and winter vacations skiing and snowboarding. Creativity poured from her, often finding her fully immersed in imaginative worlds. School, though, she found difficult. She had mild dyslexia, yet did well in school until grade 9. She worked for good grades, and worked much harder than those around her had to work. Her deeper struggles began in her early teens. Those around her didn't understand the depth of struggles as her descent began, taking her so much further beyond typical 'teen angst'. An undiagnosed mental health issue led her down a dark path as she grasped to cope. Things continued to become more and more difficult for her, but then she started to turn things around. She got herself off hard drugs, and began working on high school. Rachael, hidden under the mental illness that gripped her, was beginning to be freed. However, the recovery journey for Rachael was difficult and tragically she accepted the lie of hopelessness and died from depression and suicide.  Only three weeks before, Rachael spoke about a desire to help those in pain. She wanted to help those who struggled like her. This, she decided, was what she was meant to do.  Rachael died before her time. Rachael didn't have to die. Suicide is preventable. She lives on through our commitment to bring meaning to her 18 years, by fulfilling her desire to help those who struggle like she did. EVERYONE has a role in suicide prevention.  We are Running for Rachael to her 18 years, by fulfilling her desire to help those who struggle like she did and generate platforms of hope, help and healing in our community.  Help us to help others by participating in CF Lime Ridge RUNNING FOR RACHAEL on September 26, 2021 as we run/walk virtually in support of city-wide suicide prevention.    Register for free! www.runningforrachael.com (link in bio)   #runningforrachael2021#suicidepreventionhamilton ... See MoreSee Less